7 Most Haunted in Ohio

There are many haunted places, filled with unimaginable haunted history, that are waiting to be explored and unleash their mysteries. But there is one state in the Midwest that is over-saturated with lingering ghosts!

Known as the Buckeye State, Ohio is filled with ghost stories and tales of the crypt from every one of its regions! Together, we'll peer into the secrets of old school corridors, previously sacred halls of worship, historical homes, and a reformatory property that went bad.

There are hundreds of haunted locations to explore in Ohio, so why did we stop at seven for this list? Seven is a good number for Ohio! Ohio is the seventh most populated state in the Union, with the seventh-largest economy! So when it comes to growing an economy, a following for a presidential candidate, or selecting academia that is unmatched … all eyes (and spirits) are on Ohio! Could this be a reason why this state is full of phantoms?

Perhaps this collective attention is a reason why Ohio is so haunted. It’s been the home for many past presidents, oil tycoons, battlegrounds, and cemeteries with headstones dating back to the early 1800s. The intriguing history does not stop there! Ohio has the second-highest number of haunted houses in the nation, second only to California! So why wouldn’t the spirits linger where they are best-loved and sought?

Let’s start our Ohio road trip and explore together our seven haunted picks!

A dreadful train accident in 1910 and the collective residual energies of its past children and teachers have drawn the haunts here, a site certainly not for the faint-hearted. This haunted property is not fit for the paranormal enthusiast that can't withstand the spiritual complexities within its walls.

The air within these scholastic halls often feels heavy. There is a sense of always being watched at every turn that leads to another hallway that seems to be cluttered … filled with energy as never experienced before. You will hear what sounds like desks being drug across a floor above you, yet there is no one up there! Footsteps belonging to children followed by whispers and giggles coming from the students who still call this their home. Apparitions are part of Poasttown's para-norm, appearing as full and shadow figures.

The haunts of the Middle Point School reflect the generations of children and teachers giving their best for a significant part of their lives.  Some of these memories, for many of these now "immortal spirits," were the best years that were spent during their earthbound lives.

The small town of Middle Point, Ohio seems to breed darkness. Within this small community, there has been a high concentration of murderers that have grown up there, many of them occurring within the former Middle Point School building. Inside, the hallways seem to consume all comfort levels. Reports of footsteps, voices, shadows and even poltergeist activity are quite prevalent, including the "creepers" that seem to inhabit the "Dark Room." Each level has a different story to tell, and we are still searching for answers behind the darkness in Middle Point.

What brewery do you know that has a “Crypt Room”?  Only Father John’s, one of the most haunted bars in Ohio! Yes, this is only part of this bar's mystique! The room is embellished with a suspended, floating cross table and a glass-covered tomb complete with a coffin underneath it. How’s that to get you there with your K2 Meter? But wait, there’s more!

A former Methodist/Episcopal church, this haunted property was built on a concealed graveyard. Today the spirits live with spirits since it's now is an active pub/microbrewery. The current owner bought this historical gem in order to save it from demolition, turning it into a brewery. He filled the entire space with spiritual and religious artifacts from different cultures around the world. Who knows what kind of energy each item holds?

Father John's Brewery also features an adjoining haunted Bed and Breakfast, said to be inhabited with the spirit of a woman and a little girl. To make things more interesting, there is an actual tomb, complete with casket and all! This place is CRAWLING with energy and spectral activity! It was also featured in the World’s Largest Ghost Hunt! 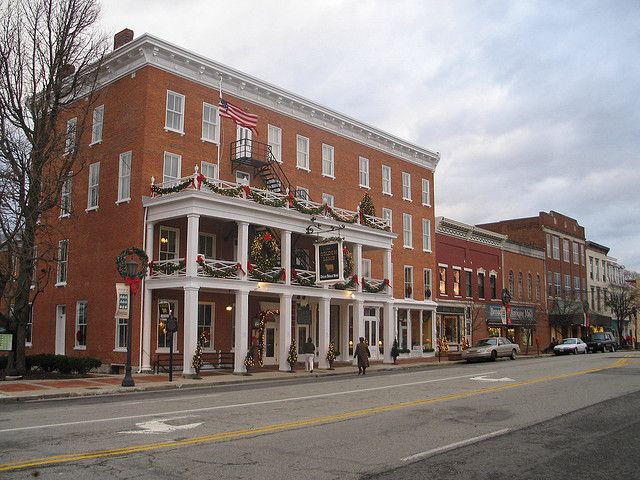 Jonas Seaman bought a license to operate a house of public entertainment in 1803 in the newly-founded village of Lebanon. I am sure he never expected that more than 200 years later, his establishment would still be offering food and lodging for travelers. His wife, Martha, was an excellent cook and with the help of servants, the new tavern became a popular place to stop for meals or a room.

The stories of activity include a small female child; some say it is a former owner's daughter Sarah. In Sarah's Room, one of the museum rooms at the Inn, objects move on their own and pictures have been knocked off the wall. A housekeeper working on the fourth floor heard what she described as a tricycle in the hallway and she heard a voice say, "Sarah's back," she rushed out into the hall and no one was there. In one room, an apparition is seen standing at the foot of the bed and the lights and TV turn off and on by themselves. There is another apparition seen in the building, which is thought to be Clement Vallandingham, who accidentally shot himself and died in the Inn. Chairs and silverware are moved about in the dining room.

If you are looking for another old haunted academic setting that sizzles in Ohio, we introduce the South Main Elementary School in Bowling Green. Built in 1890, the school is a hotbed of unexplained activity. The first school in Bowling Green, thousands of students passed through its halls until declining enrollment forced it to shut down in 2005.

Phantom footsteps, strange noises, closing doors, and disembodied voices are just some of the phenomena experienced in the school during its operation and after its closing. Activity continues to this day.

This is not one school you want to skip!

Looking for more historic-inspired haunts? The Gill House in Galion is packed to the brim with such!

A story that has passed from generation to generation tells of the Gill House's frequent visitors, including Henry Ford and Thomas Edison. An ancestral granddaughter to the original Gill family, Mary Jane Williams Vail, claims that Henry Ford was acquainted with her grandfather. In fact, when Ford came to visit in the early part of the 20th century, his drive into Galion gave local people a glimpse of the first automobile seen in the city. Wonder if this Ford Country?

It is also noted that Harvey Firestone, the founder of the Firestone Tire and Rubber Company, stopped at the Gill House for lunch in August 1923 after attending the funeral of President Warren G. Harding in Marion.

Today, after undergoing continuous historic renovations, the Gill House can easily take on the title as one of the most haunted properties in Ohio! Many paranormal investigators have claimed this place is packed-full with activity. Compelling paranormal evidence has been gathered by many brave enough to investigate this historic property. Visitors to Gill House from various groups report similar paranormal activity, such as a little girl in white.

We saved the most prominent and famed Ohio Haunts for last, for all roads led to one of the most haunted buildings in the world.

Originally built in 1886, the Ohio State Reformatory (OSR) in Mansfield has been closed for its main purpose since 1990. It majestic beauty and architectural strength made it the perfect spot to film the classic movie The Shawshank Redemption.

When it first went into operation, Mansfield Reformatory (as it's often called) took in young males that were first-time and non-violent offenders. The original goal was to reform them by teaching them useful skills and motivating their spirituality.

Unfortunately, the state -- forced with a growing prison population -- was eventually forced to change this scheme, opening the Reformatory's cells to hardened criminals. With this, the Reformatory became overcrowded; at times, cells that were designed to hold a single man, now held three. The focus shifted from the reformation to punishing unruly prisoners.

The punishments that were administered were antiquated and often featured unforgiving torture devices. Imagine "the Butterfly," a form of electro-torture, water hoses, a sweatbox for non-white prisoners. There was also "the Hole," which was a small, barren and solitary confinement cell. Along with the possibility of being tortured, the inmates were subjected to extreme violence from other inmates, horrific food, rat infestation and infectious diseases.

To say this place is haunted is an understatement, leading it to be called the most haunted property of all of Ohio, if not ... the world! Witnesses have experienced shadow figures, slamming cell doors and yelling voices. Female witnesses claim to have been victims of physical attacks by the spirits who linger in this place. This is only the beginning of one of the most horrific spaces plagued by spirits in the world.

The massive and colossal space that covers OSR is clearly a challenge that cannot be undertaken with a single investigation. To help you out, the Mansfield Reformatory has identified the eight most haunted spots within its structure:

Now that you have your game plan, we know you won't be disappointed with the OSR. Make sure to check back with us and share your experiences, if you dare!

Now that you have crawled all over the Buckeye state, do consider sharing this article, at least with the brave buddies that would dare to join you on this haunted road trip.

Enjoying our work? Please take the time to join our mailing list! Friends of Haunted Journeys will receive the most mystical, mysterious, and above all, most haunted experiences in our universe. You will also learn about incredible journeys and events within the supernatural!