5 of the Most Haunted in Massachusetts USA: Phantoms of the Bay State!

The phantoms of five of the most haunted places in Massachusetts are eager to tell their spooky stories. Here are our spine-chilling picks from the Bay State!

The original Parker House Hotel opened on the site on October 8, 1855, which makes it the longest operating hotel in the United States. The very first owner, Harvey D. Parker, was known as the ultimate host and continues the tradition even after his death.

Parker's phantom occasionally drops in on his guests to make sure they are satisfied by their stay. Back in 1950, his apparition was seen standing outside room 1078 by a woman who was a guest at the hotel. She said at first it was a misty apparition and then he fully appeared; he turned towards her. Harvey is not the only ghost here. Room 303 appears to be the most active. People report the smell of whiskey and the sound of laughter from the room after a businesswoman died there.  You might run into the ghost of a 19th-century whiskey salesman who lives in the closet of room 303 and plants booze-soaked kisses on slumbering female guests. Actress, Charlotte Cushman, died in the hotel in 1876 and Charlotte may turn on the faucets to get your attention. Stephen King's short story 1408, was based on the paranormal experiences in room 303. Unfortunately, there's not a chance your request will be honored. The room has been turned into a storage room.

The original part of the Inn was built in 1716. Throughout the Revolutionary War, the Inn served as a hospital. In the early 1800s, sections of the Inn were used as a variety store and a residence. The building was also a boarding house and a small hotel. It began operating as the Inn in 1889.

During the Revolutionary War, room 24 was used as an operating room and the Liberty Room was used as a hospital. This may explain the activity experienced throughout the Inn. Lights flicker in the room or turn on and off on their own. One guest awoke in the middle of the night to find every light in the room was on, as well as the television. Guests hear whispers coming from the closet and have seen the door to the room slam shut on its own.  Apparitions of both a middle-aged woman, thought to be a nurse and wounded soldiers have appeared in room 24. An older woman and a tall gentleman have been spotted in the sitting room. A young girl in a bonnet has been seen walking around by the front desk of the hotel.

Prior to its construction in 1925, Bridget Bishop, the first woman executed during the trials for the practice of witchcraft, was said to have owned an apple orchard upon which this hotel was later built.

The Hawthorne Hotel is often ranked as one of the most haunted hotels in America and certainly Massachusetts. The activity is commonly reported by guests have been moving furniture, sightings of a ghostly woman, and unexplained noises. They will also detect strange sounds and smells, and ghostly sightings including apparitions and disembodied whispers. There are some that you here at the Hawthorne you will encounter lost sea captains that have returned to their pre-mortem gathering place. The most haunted room is 325, where claims of hearing an unseen baby crying, lights turning off and on, and even water faucets inexplicably actuating. Others have reported numerous unidentifiable or explainable sounds. Room 612 is another hotspot. Here an apparition of a woman has been seen walking the halls and sometimes stands still in front of Room 612. Within the room, guests have reported the sensation that they are not alone; as if someone else is sharing the room with them. Some guests have cited the unexplained smell of apples. Could this verify what some have determined this specter is the spirit Bridget Bishop, the first woman executed in the witchcraft trials?

This incredible Queen Anne Victorian style home was built by Sylvester K. Pierce in 1875. Sylvester Pierce was a wealthy businessman who achieved his fortune as the owner of the S.K. Pierce and Sons Furniture Company.  His plans were exquisite, for he wanted to spotlight his great success as an entrepreneur. But unfortunately, fate did not cooperate. There was much premature death and loss of wealth between the family members. This lead to the property resorting to dark practices that turned the home from a loving environment to one that embraced evil and criminal activities. Dark temptations led to Edward turned the masterpiece mansion into a boarding home where some unsavory activities such as drinking, gambling, and prostitution became the norm.  There were even tales of murder.

Due to its dark and troubled history, and the emotionally charged devastations endured in this property, it is absolutely saturated with intense paranormal activity. The phantoms of the Victorian Mansion include the master of the house, S.K. Pierce, his wife Susan Pierce, and Edward Pierce, his son. There is also Mattie Cornwell, who served as a nanny for the children.  Another spirit that lurks in this property is David who is believed to have been the red room strangler. Of course, all the victims are also present, including the prostitute murdered in the red room, a young boy, a younger girl (thought to be Pierce's granddaughter, Eino Saari), and some other unnamed dark entities that lurk in the basement.  The hauntings here are classical but on a steroidal surge.  This spotlight is just an overview, be sure to read out full ARTICLE on this property. The owners, workers, and guests have experienced disembodied voices, chants, and full-body apparitions. Furniture will move on itself and the screens will fly off from the windows without explanation. People have heard doors slammed and the sounds of disembodied footsteps on the stairs and hallways..

This is the original house where in 1892 a brutal, double murders took place. Andrew and Abby Borden's bodies were found on that ghastly August 4th morning. Now a bed-and-breakfast, it may never be known if it was Lizzie that ax murdered her family in the house or not. Regardless of who did it, the house remains haunted.

Most will say that murder scenes, that are filled with emotion and turbulent family relations keep phantoms entrapped in spaces for many reasons. There is no exception with the Lizzie Borden Bed and Breakfast. Chilling stories of the activity at this location include covers being ripped from the bed of sleeping guests. Many have witnessed objects being moved about the house with no explanation. Yes, you may hear children laughing and playing.  Most frightful are the full-bodied apparitions of men, women, and children. There are reports of disembodied footsteps on the top floors and stairs when no one else in the home. Many have seen shadow figures, and doors opening and closing on their own. Phantom smells such as floral cologne and lights turning on and off on their own have also been experienced. 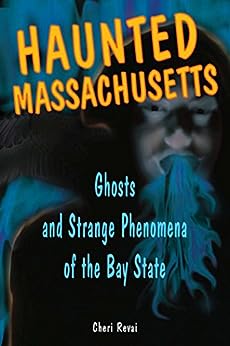