5 of the Most Haunted in Montana USA: Phantoms of the Treasure State!

Written by Haunted Journeys
Published: 28 May 2020

The phantoms of five of the most haunted places in Montana are eager to tell their spooky stories. Here are our spine-chilling picks from the Treasure State!

Buffalo Block Steakhouse at the Rex 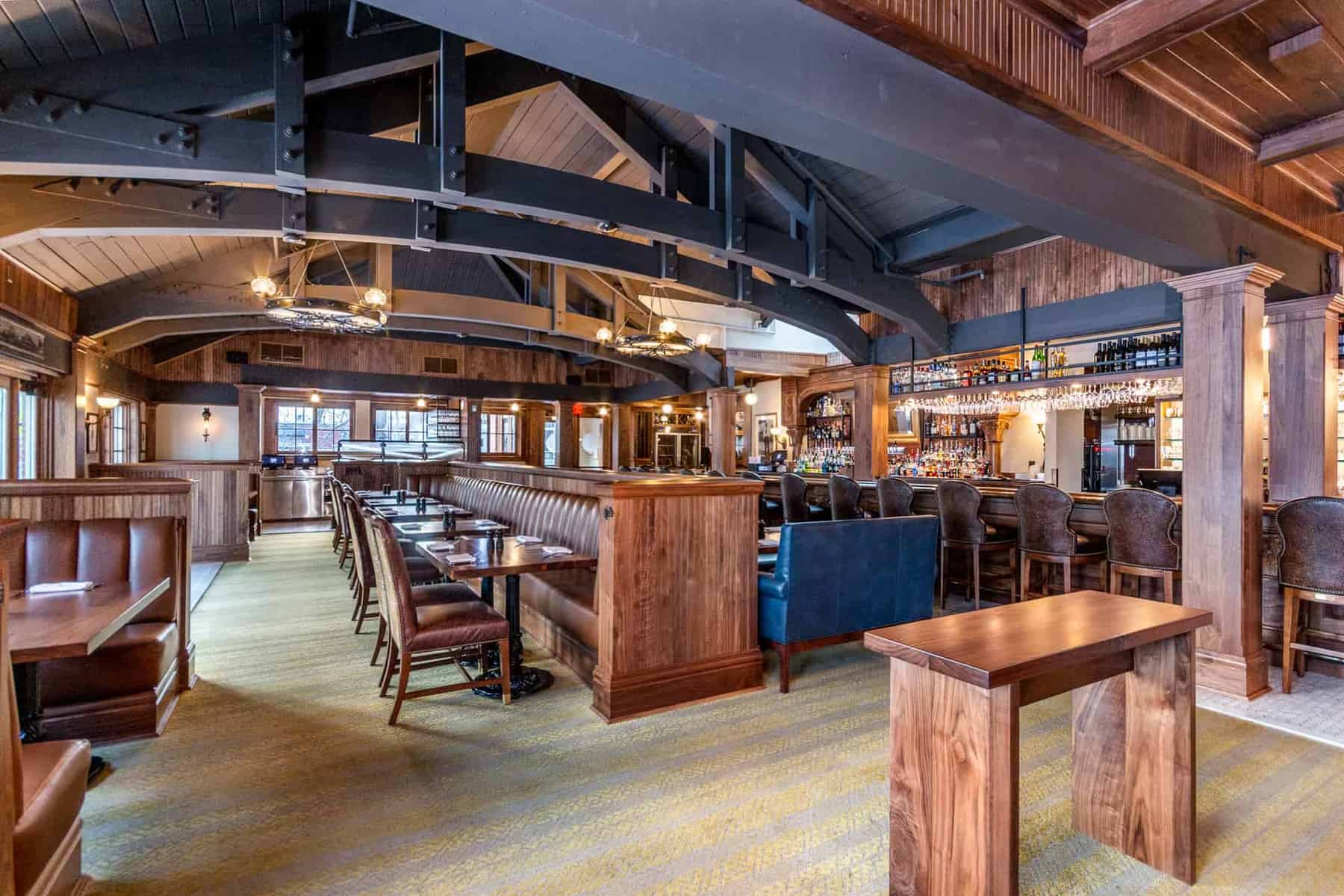 Formerly Rex Restaurant, the new owners of Buffalo Block Steakhouse at the Rex have polished it back and brought back life to this old historical beauty! Constructed in 1910, just 28 years after Billings itself was settled, the Rex has long been a formidable presence in the historical landscape of Montana. In a nutshell, it was a hotel for frontiersmen, the Buffalo Block at the Rex also served as a brothel and speakeasy during the prohibition era. And the dead do have a presence here!

When you mix illegal boozing, with a bit of a speak-easy attitude, prostitution, and gambling, you know spirits will hang out forever no matter if they are dead or alive. This restaurant is a hotbed for apparitions, of all sorts of phantoms! When it was operating as the Rex Hotel building was said to be haunted by a former bartender, Buck, from the 1920s or 1930s. Apparently, if the story is true, he was gunned down by a group of mobsters. Apparitions of prostitutes have been seen on the stairs and on the second and third levels. Perhaps during the roaring 20s, the gals were employed for some of the Prohibition drinking parties that took place in the room up there. They are described as ghostly figures, appearing like ladies of the night.  Another sighting is of a grumpy old man in the basement at night as witnessed by the employees. Many think he may have been a gambler or a boot-legger.  There's another fella that is thought to be a ghostly waiter and often stands next to patrons tables as they eat their meals.  Both Patrons and staff claimed that after the restaurant was closed for the night, all the lights would turn on and the doors would fly open, by unearthly hands! Many hear men talking and also when the bar is empty.  Yes, there can be supernatural poltergeist activity as well! Several diners and a bartender have reported being attacked by an unseen entity. They think the male phantom that wears a white shirt is the source. Besides attacking the closing bartender, he enjoys watching the women in the basement bathroom.  There have been plenty of reports of finding a man in the downstairs ladies' bathroom who then vanishes into thin air.

The Bannack Ghost Town, now a State Park, was originally founded in 1862 when gold was discovered along Grasshopper Creek. Bannack's economy was dependent on the mines. Throughout the years that followed, mining dwindled. The town shrank in population.  Around 1940, the town closed down and all the mines closed for good. Want to experience its haunts? Check out the (once) Hotel Mead. Constructed in 1875, it used to be the first Courthouse, later converting to a hotel. With epidemic outbreaks, this building was also used as a makeshift hospital at times when it was called for due to high need.

One of the phantoms here is that which belonged to Dorothy Dunn, who drowned in a nearby pond in 1916. She was also the daughter of the hotel manager at the time. Her full-body apparition is seen mostly by children. She wears a blue era dress and attempts to speak to them. She has been seen looking out of the second-story window of the hotel. Many folks have also heard the cries of children in the hotel. These could be the phantoms of the children that died here while it was a hospital from horrible infectious diseases. Other claims are the sounds of heart-wrenching wails of children that were put into the hotel safes when the natives attacked the town. You may also catch the ghost of an older woman in the hotel that also haunts the second floor. She has been seen looking out a window on this floor, witnessed by visitors.   The infamous Henry Powell's phantom is said to haunt many buildings in Bannack. He was said to be responsible for burning the Saloon burned down to the ground, and for a good reason.  Read about it here.  Let us not omit, that the spirits of many outlaws that were executed remain here as well.  Certainly, this ghost town is not abandoned, for the phantoms (and the goodwill of preservationist) keep its history alive.

Initially called the Spofford Hotel, the Pollard Hotel was Red Lodge's first brick building in 1893. It was purchased by Thomas F. Pollard in 1902 and renamed it after his namesake. The Pollard Hotel became the west’s gathering place for political, theatrical, cowboy, and business personalities in the late 1800s. As does most hotels with deep-rooted historical stories, numerous ghosts are said to still be at the Pollard Hotel.

The third floor has its good share of spectral activity. Take for instance the female apparition that appears in a yellow era dress. She is seen most commonly on the third floor. She is said to leave the scent of perfume, which sometimes travels to the second floor. The lights on Room 310 turns itself on frequently. You can turn it off and leave for a number of minutes, but it will often return to the on position again. Management has checked thoroughly for the possibility of faulty wiring, there is no human explanation for this. A male apparition has also been reported floating around near the bar in his 1920's clothing. Apparently he likes to play pranks.  The most unusual story is that of a Ghost Monkey. There are stories of the Pollard children having a pet monkey who escaped during a renovation. It is rumored that the monkey may have been walled off unknowingly during construction. Housekeepers continuously attempt to clean the front door glass, returning to see tiny handprints after just polishing it. Not to blame naughty kids, for often children were around the front area when this happens.

In 1900, Percie & William Knowles built and opened the Chico Warm Springs Hotel in 1900 as a boarding house. Its successful growth was due to the activities offered at (now) the expanded hotel, including dancing, lawn games, and a horse-drawn carriage to and from the train station, and (of course) swimming in the hot springs. When her husband passed away, Percie wanted to turn the hotel into a health spa. She stopped serving alcohol and hired Dr. George Townsend, who believed in the therapeutic properties of the mineral pools. Business slowed due to the Great Depression in the 1930s. Percie Knowles became overwhelmed running the property. She began to suffer from mental illness and was sent to the state hospital for treatment. Here she passed away in 1941, but many feel her resilient spirit lives on.

In May of 1986, while rounding the hotel, two night-watchmen came upon a nebulous white form of a young woman. She was hovering near the piano on the third floor's lounge. Only her upper body of the spectral vision could be seen. She is known today as the Lady in White. Here apparition continues to show herself to both employees and guests have seen at the resort. The phantom is thought to be the spirit of Percie Knowles. In 1990, two other security guards followed the Lady in White from Lobby to the hallway leading to Room 349, where the presence has been reported by many employees and guests. One time two housekeepers entered Room 349. Opening the door they both smelled a perfume of lilac and jasmine. Although the room was empty upon entering, the rocker was gently rocking back and forth. The rocker is also known always to end up facing the window no matter where it was placed. She's not the only ghost in the property, several employees also have encountered what they believed to be a male ghost. The tall bearded figure wearing an overcoat has been reported as having appeared to guests while he slept and intervening in very concerning actions, almost restraining the guests onto their beds. Other unexplainable things happening include an old family Bible that stays open on a wooden bench in the Attic and never collects any dust. There seems to also be spectral activity in the kitchen. Some guests have heard the crashing of pots and pans as if someone were cooking or cleaning in the kitchen in the middle of the night when no one was there. You may also hear disembodied moanings from a female spectral source.

In response to rampant lawlessness and the vigilante-style form of justice present in the newly formed Montana Territory, a territorial prison was commissioned to be built.  The Old Montana State Prison was completed in 1871. It only took a single month before the prison was overcrowded. Throughout the prison's history, the institution was plagued with constant overcrowding, insufficient funds, and antiquated facilities. The building had no heating or ventilation. The smoke wood stove heaters combined with the stench of bucketed human waste and unwashed bodies made conditions pretty intolerable. On April 16th, 1959, Jerry Myles and Lee Smart led twelve inmates in a riot that turned deadly. The Deputy Warden, Ted Rothe, was shot through the heart with a confiscated gun by a 19-year-old convicted murderer named Lee Smart. A guard, William Cox, was slashed from armpit to elbow with a knife wielded by an inmate. They took 18 prison employees and five stool pigeon inmates as hostages in three cells, threatening to burn them alive. 36 hours later, the standoff ended finding the riot leaders Myles and Smart dead at the top of the northwest tower from an apparent murder-suicide. Due to declining degenerative problems, the old prison was closed in 1979.

This dark history that is accentuated with the violence of the prison riots predetermines intensive supernatural activity that is not for the light-hearted ghost hunter. Terrifying physical attacks paranormal activity have been reported, such as the horrific sensation of being choked by some unseen hands. Others have sustained scratches covering their bodies. In the former site of the women's prison, people have been pushed down corridors. Other phenomena reported include strange sounds and disembodied voices. There are shadows seen and full-bodied apparitions. Many people being touched. Be aware if you are empathic, you are sure to feel an overwhelming sensation of dread and anxiety.