5 of the Most Haunted in New Hampshire USA: Phantoms of the Granite State!

The phantoms of five of the most haunted places in New Hampshire are eager to tell their spooky stories. Here are our spine-chilling picks from the Granite State!

The Inn was built in 1875.  Its history speaks about a lovely 12 years old called Laura. During the 1800s, her parents owned the inn and often left bright and responsible young Laura to manage the Inn while they went out for a short period to tend to business. On one occasion, while Laura was minding the Inn, a fire broke out. Laura was trapped inside the Sanborn room. Laura succumbed to the flames and perished in the fire before help could arrive to save her.

The inn’s resident ghost is named Laura, who perished at just 12 years old during a fire. Multiple guests have reported seeing her apparition of the young girl in various rooms and hallways throughout the inn. Although her most visited room is the Sanborne (for here she here), there have been many encounters with Laura both upstairs in the rooms, and downstairs in its pub and restaurant.  Some have felt unexplained cold spots, indicators of Laura's presence. The staff has reported that Laura also loves to play pranks and move things around. Her image has also been captured in digital photographs during a paranormal investigation. During these sessions, her voice has also been represented on clear EVP (Electronic Voice Phenomena), aka digital recordings.   Laura is not the only spectral entity here. We go in a bit deeper with our LISTING of this property.

The Beal House was initially built as a farmhouse in 1883. The original builders successfully farmed the valley and raised generations of family in the classic Georgian home. Fifty years later a widow, Mrs. Beal, converted it to (what was known then) a Rooming House bearing her name in 1933.

The exact identities of the phantoms that are lurking the inn, representing the historical remnants are not known. Regardless, there is no doubt of their presence. Spirits make themselves known with heavy disembodied footsteps on the stairs. These entities also tend to slam doors with great force. Sometimes their voices will be heard in certain areas, including unoccupied rooms. A particular hallway delivers a strange feeling to both staff and unknowing guests. They may see moving shadows and shapes seen out of the basement's lighted edge. Imagine seeing pillows floating above furniture as it is witnessed here. Objects are moved by unseen hands from where they were originally placed by the living.

The stone mansion holds much history, one partial segment is embedded in the gravestone that sits prominently in its front parlor. Its inscription reads "1778. Nancy Barton. Died in a snowstorm in pursuit of her faithless lover."  History tells us that Nancy was a servant girl working for the Whipple family in Lancaster. She fell in love with another fella that worked for the family as well and soon became engaged to marry him. But, unfortunately, her faithless fiancée ran off with her dowry while she went into town to buy her wedding attire.  Nancy, devastated, would not give up her dreams of reuniting with her lover. She immediately set out on foot to find the lover that left her behind, following the well-acquainted route he usually took on trips to Portland and Boston. The feckless gentleman often made a camp where this inn now stands.  Tragedy followed for Nancy, with a terrible snowstorm that cost her life. Friends found her frozen body next to the brook that now bears her name.

Though her physical body gave up to traitorous weather, her spirit still roams looking for the man that left her behind with her family's dowry. Her spectral entity has been witnessed by both staff and guests in this lovely inn. Many guests have stated feeling her presence in their rooms. The husband of a couple who had stayed here several times woke up after an afternoon nap and noticed that someone (his wife supposedly) had brought fresh flowers into the room while he was napping. He reports that he went into the bathroom and someone had written "Happy Anniversary" on the mirror in lipstick. He went back into the bedroom, but the flowers were gone. He turned back into the bathroom, and the writing on the mirror had disappeared!

This grand resort was built in 1902 by Joseph and Caroline Foster, railroad tycoon, with the help of 250 Italian craftsmen who were skilled in masonry and woodworking. Caroline Foster was a long-time inhabitant of the area, so the get-away property was built with special accommodations for her, including an indoor swimming pool and private dining room.    Sadly, Joseph died suddenly a year later.

Shortly after her death, Carolyn's ghostly apparition is said to appear in Room 314. This was her room, and chillingly, her original four-poster antique bed is still there. Some guests may feel a nudge from her. More chillingly, others have had the privilege of meeting her in full spectrum. She is often seen Carolyn dressed in an elegant Victorian dress, sitting on the bed brushing her hair. They have also seen her apparition walking in the proximal hallways, sometimes penetrating into walls without explanation. There may be light taps on the door. When the guest went to answer the knocks, three was no one on the other end.  Items that are carefully positioned may disappear, (and just as quickly) suddenly reappearing where left.  There are also unexplained noises and disembodied whispers.

The Windham Restaurant occupies one of Windham's most significant historical sites. First opening as a farm in 1729, the current Colonial Style building was constructed in 1812. Extensive renovation occurred at the turn of the century, serving as a home for the Governor Dinsmoor’s Family.

There seems to be a spectral entity for special places around the eating establishment.  For instance, there is Jacob. He is also known as the “The Man in the Blue Suit". He is also the most active. It is believed that he lived in the property when it was a home. He suffered a fatal heart attack that sent him struggling down the steep front staircase. Although the phenomenon here is mischievous, it is not malevolent. It is, though, almost that of a poltergeist. One time a phenomenon occurred when Christmas packages somehow stacked horizontally in midair over the staircase. Another time a full place setting vanished from the table. Chairs have also been moved on their accord overnight. Expensive dishes and wine glasses have also been shattered by unseen hands. A man has been seen falling down the stairs, only to disappear suddenly when folks reached out to help. Guests and staff have experienced electrical annoyances. There is also a curious obsession with blond women. A number of women, all with light hair, have reported feeling a presence near them, while their jewelry has unfastened over and over again for no apparent reason. 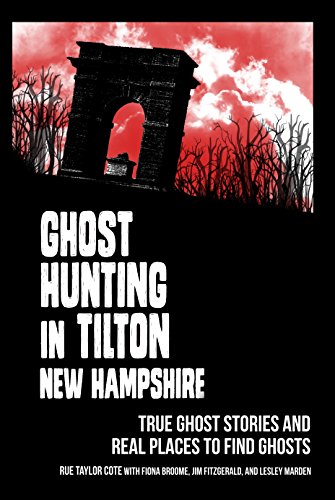