5 of the Most Haunted in Scotland: Phantoms of the land of Caledonia!

The phantoms of five of the most haunted places in Scotland are eager to tell their spooky stories. Here are our spine-chilling picks from the land of Caledonia!

Built in 1877, the Cathedral House Hotel was constructed in a Scottish Baronial style. It is located in the heart of Glasgow's most historic area. The hotel sits directly across the street from the spooky Glasgow Necropolis. It also has a very troubling connection to the (now demolished) Duke Street Prison. In fact, the originating purpose of the property was to serve as a hostel for inmates released from the Duke Street Prison. This prison was known to be unforgiving where many atrocities, poor living conditions, and executions were experienced.  The last hanging of a woman was done here back in 1923.

Apparitions of children are often seen, as well as hearing their disembodied giggling on the top floor. One little chap prefers to hand around the main staircase of the property. You may feel him whisking against you as you climb the stairwell.  This mischievous little boy has been reportedly been seen running through the downstairs bar area before disappearing right through a wall. There is a story wish tells of a woman that was just released from the Duke Street Prison was reunited with her two young children at the old hostel, of what is today the Cathedral House Hotel. The woman who must have been suffering some form of mental break became distraught, believing that her children would be taken away from her once again. Sadly, her way of coping with this anxiety was to drown both of her children in one of the hotel’s bathtubs. Since their tragic deaths, many have reportedly encountered the ghosts of these young children, particularly in the upstairs bedrooms where their deaths occurred. They have been seen and heard, giggling and playing by many people passing through the haunted hotel. Could these be children that are heard?

Three centuries old, in its early years, the inn hosted "drovers" (cattle herders) after which it is named. The most famous guest of the Drovers Inn was none other than the local folk hero, Rob Roy, known by many as Scotland’s Robin Hood. There is a significant story that leads to many of the hauntings here. Read about it in our extended LISTING.

The Drovers Inn and its pub are rumored to be one of the most haunted hotels in the United Kingdom, and most of the stories revolved around this tragic story of the displaced family. Over the years, there have been many accounts of people witnessing the young family wandering the land in the winter months, trying to find shelter. On more than one occasion, they have even appeared to have arrived at their destination that fateful night. One account goes, that a couple who were staying recently in The Drovers Inn, in room 2, woke during the night with a cold shiver. Only to find that the young family was standing shivering at the foot of their bed, their breath visible in the now freezing air. The young boy waving up to the couple, as if he was happy to have finally found what they were searching for. Another story, occurring on October 21st in Room 6. A couple, after having a bite to eat retired to their room for the night. At some stage in the middle of the night, the couple awoke to dozens of flickering lights, dancing around in the room. The room was pitch black and there was no other light source found to explain the phenomenon.

Castle Rock had been a military base and royal residence for centuries. However, the edifice that is known as Edinburgh Castle was built during the 12th century by David I, son of Saint Margaret of Scotland. It stands as one of the oldest fortified places in Europe.

With 900 years of history experienced in this property, there is no doubt the Edinburgh Castle is reputed to be one of the most haunted spots in Scotland. To permeate it, Edinburgh itself has been called the most haunted city in all of Europe. Its dungeons houses many strong phantoms, including the Duke Alexander Stewart of Albany (who escaped, stabbing his guards to death and then burning their bodies), Lady Janet Douglas of Glamis (accused of witchcraft and burned at the stake), and an unnamed piper who once wandered down one of the castle's underground passages and never returned. Today, they still remain. On various occasions, visitors to the castle have reported the phantom piper, a headless drummer, the spirits of French prisoners from the Seven Years War, and colonial prisoners from the American Revolutionary War. There is even the ghost of a dog wandering in the grounds' dog cemetery.  Shadowy figures, sudden drops in temperature, and the feeling of something tugging on your clothes are all everyday experiences in Edinburgh.

Built in 1128, The Palace of Holyroodhouse, also known as Holyrood Palace is deeply absorbed with the stories and legends of crimes committed, and its victims.

Although breathtakingly beautiful, the Holyroodhouse is saturated with the energy of spirits that cannot find peace. It's infamously known as the scene of David Rizzio's murder in 1566. Rizzio was believed to have been Mary Queen of Scots’ lover. Her husband Lord Darnley, was informed of the affair, and later ordered Rizzio's murder, which occurred in Mary's dining room, with Mary present, and seven months pregnant. The bloodstains from the murder are said to reappear no matter how many times they’re scrubbed clean. Lord Darnley, the killer and Mary's husband, himself is said to haunt his old rooms at Holyrood. He also, it is believed, met a gruesome end, after an explosion destroyed his living quarters. Many people are of the understanding that Mary secretly ordered the death of Darnley, to seek revenge for the death of Rizzio. According to accounts of visitors, the long, dark halls of Holyrood Palace are sometimes swept with unexpected winds, and the sound of crying can be heard emanating from the basement.

Many folks have reported hearing the heart-wrenching screams and pleadings of young children. There are many that these are the cries of the Baron's victims who are still trapped within these oppressive walls. Prior to the building of the castle, it is believed that the small mound next to the ruined chapel a quarter of a mile from the northwest corner of the castle lies the grave of the giant, Cout O’ Keilder.  The giant was known to terrorize the area and wore an enchanted chain-mail that left him unaffected by blows.  The giant met his fate when he was drowned in the deep pool of water in the river called the drowning pool.    It is said that the giant still walks the area searching for those that drowned him. And, yes, the castle is said to also be haunted by Mary Queen of Scots. 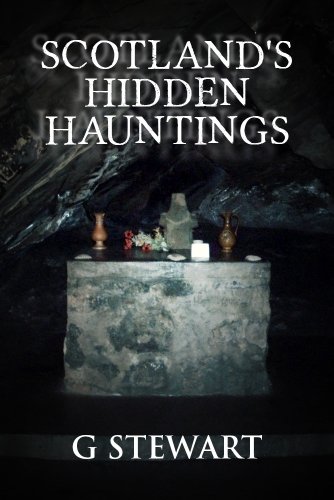