5 of the Most Haunted in Utah USA: Phantoms of the Beehive State!

The phantoms of five of the most haunted places in Utah are eager to tell their spooky stories. Here are our spine-chilling picks from the Beehive State!

The Bigelow Hotel, formerly known as the Ben Lomond Suites, was built in 1927 with 13 floors, is considered one of the tallest and largest in the city. Prior to its construction, there was another hotel on this site called the Reed Hotel opening in 1891 with five stories. There have been tales of folks dyeing in this hotel, including Mr. Steele, who died of tuberculosis. Eight more deaths followed before being replaced by the Bigelow. Most died of natural causes, but there were a few tragic deaths.  When the Bigelow replaced the Reed Hotel, the deaths resulting from the tragedy continued on. Many suicides, murders, and accidental deaths followed, many detailed in our ARTICLE about this property.  Mysteriously, many of these have occurred on the 11th floor.

Want to stay in the most haunted room at the Bigelow?  Request to book Room 1101, 1102, or 1106. In fact, any room on the 11th floor will do, for you see, five spirits haunt the exclusive 11th floor, making it a hotbed of activity. The 11th floor is not accessible to the general public but only to those given a key to a room in that hallway. he front desk reportedly receive multiple phone calls from unoccupied rooms on the floor. Elevators will randomly stop, without being summoned on this story. You may detect an unexplained aroma of perfume or feel cold spots that have no origin. Many have reported hearing disembodied voices, door slamming, and see full-bodied apparitions. Guests who have stayed Room 1101 have documented many unusual events, such as the water in the tub of the room running, attempting to fill the tub. Many have had physical encounters in which it felt as if they were being physically pushed by an unseen force. In 1102, there are several accounts of voices as if someone is talking, visions of physical apparitions, and even personal encounters in which visitors and staff have come face to face with these tormented souls. Disembodied voices are heard in room 1106, while apparitions are also seen there by guests and staff.

On this site, on September 11, 1857, nearly 120 settlers were murdered during the Utah War, by members of the Utah Territorial Militia.  Men, women, and children were attacked by a group of Mormon Militia. After their brutal massacre, their bodies were buried in shallow graves, were wild animals quickly dug up their carcasses and scattered their parts over a two miles stretch. They quickly fabricated a story blaming the native Paiute for this slaughter. In March of 1877, John D. Lee, one of the heads of the Mormon Militia was executed by firing squad. He was the sole convicted offender for this devastating tragedy.

When visiting this place of great reverence and sadness, many people have stated that they also have an overwhelming feeling of being watched. Some say that they have even heard the cries of the children and women screaming all with a tone of agony. Shouts of terror from the phantoms of the men that were killed have also been heard carried through the breezes that travel through this property. A few visitors have actually seen a woman walking across the meadow in period clothing. Did she appear to be looking for something, perhaps her children? Others have reported seeing school-aged kids running through the fields joyfully. There is also the story of an older man seen in broad daylight at the memorial. Standing in the 1800s wear, he is distinctive from the visitors paying their respect. He is seen crying. Many have claimed that this is the phantom of John D. Lee

Built in 1929, The Kirk has a rich history and timeless charm. It has changed ownership many times. Some time ago, perhaps during a pandemic, it is said the military took over the hotel and used it to store 15 bodies that had died during an infection. They actually burned the corpses in order to keep the disease from spreading.

The third floor of the Kirk Hotel is said to have the most paranormal activity, but you can count on the entire hotel having significant findings. Guests report seeing a woman who appears in the window, mirrors, or photographs. There has also been a report of witnessing a shadowy figure at the top of the stairs. Radios and Televisions will turn on and off by unseen hands. In addition, don't be surprised when you leave your room and find that some of your belongings, such as cell phones, keys, and even furniture, have been moved around.   Other reports have included doors and cupboards that have spontaneously opened and closed on their own. There is a spooky story associated with this hotel. One day a lady was walking her dog down the hall when her pet was thrown against the wall.  The local Fox Television Station made a story about the haunts on the property and also were stirred by the activity there.

Once a tent for miners, the actual lodge was finally built in 1947, slowly growing and became a destination for those wanting to take in the area's natural beauty.

A poltergeist type of environment wreaks havoc with employees and some of the guests. Many guests that have stayed at the Silver Fork Lodge reported feeling cold spots and hearing whispers and moans that cannot be explained. Items are moved from one place to another. Lights will flicker, and chillingly just like some appliances, they will turn themselves on and off.  Apparitions have also been seen here.

Composed of two historical homes, the first built in 1873, is said to have hidden polygamists in the attic via a secret door. The second, built in 1883, was known as the President’s House since it hosted some of the early presidents of the LDS (Mormon) Church.

Although the staff of the inn denies any spectral happenings, many guests (and one paranormal investigation that has been posted on YouTube) have reported a strong feeling of uneasiness, almost a creepy unsettling state. Items have been known to move around from place to place. Many of the reviews on the inn are truly delightful, and the one-room that felt the creepiest would be Jane's Room in the Attic, which happens to be where they hid the Polygamists. The rooms at the Seven Wives are each named after one of the eponymous wives of the original owner. Could this be why they are still lingering? 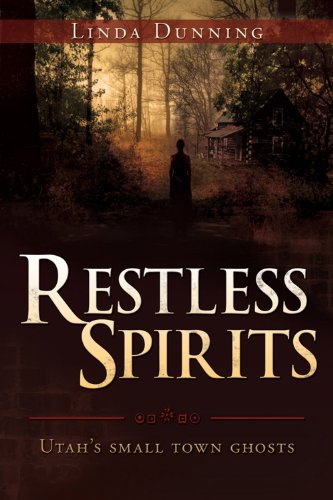