Chase on the Lake

Walker MN is home to one of the most haunted places in the state, Chase on the Lake. Come explore its mystery with Haunted Journeys.

According to historical records, prior to the grand expansion of the Chase Hotel, the original hotel was called the Pameda Hotel. Its basement was used as a temporary morgue for dead soldiers during the 1898 Battle of Sugar Point.

Then in 1922, the proprietors Bert and Louisa Chase redesigned the Pameda to become the Chase Hotel, an incredible hotel designated to be the future of Walker, with appointed grand and modern details. A newspaper announced the great opening, as “One of the Grandest Events in the History of Northern Minnesota.” On June 8, 1922, nearly 400 guests came from all over the state, arriving by train, car, and even seaplane to attend the grand opening and official dedication ceremonies of the New Chase Hotel on the shores of Leech Lake." They also built another modern, upscale tourist lodge called Hotel Isabel on a piece of land where the family once lived on in a tent.

More dark history followed that could possibly explain its supernatural history. During a 1922 renovation, the son of the hotel founder, Lewis "Bert" Woodruff Chase suddenly died of pneumonia on May 27, 1922. The grand reopening, 11 days later, doubled as a wake.

More tragedy continued. A fire in 1997 severely damaged the structure, and it remained vacant until it was razed 10 years later. The current Chase on the Lake was opened in its place in 2008. But the spirits have not left or been replaced. They are the remnant of history left behind.

Today, the hotel is listed in the National Register of Historic Places.

Among the building’s many spirits. Some say they are the soldiers who died in 1898’s Battle of Sugar Point, considered the last conflict between the U.S. Army and Native tribes. The soldiers’ bodies were stored in the hotel’s basement until they could be transferred to Fort Snelling or buried. Read more about this in Adrian Lee's book Mysterious Minnesota (offered below). This is where one of the most haunted parts of the hotel is today, their basement bowling alley.

The front desk staff will tell you secretly, "Oh... This place is soooo... haunted!" They will unanimously point to one of the hotbeds in the building ... the grand staircase and the bowling alley. Other employees have revealed stories of phantom children playing in the hallways, unplugged phones ringing, and the grandfather clock in the lobby spitting its key from its lock. In addition, the jukebox will start to play without explanation. Some investigators have heard the spirit of a stable boy. There are also aggressive characters from its lumberjack and Prohibition years.

During a 2007 renovation, the family's original funeral garb as exhibited in the lobby from the 1922 renovation. Many witnessed some of the apparel swaying in an unexplained gush of wind. 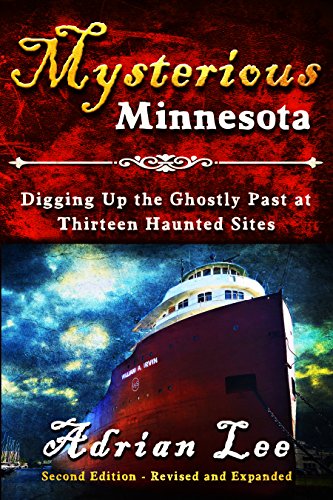