Stay at The Myrtles Plantation

St. Francisville, LA is home to one of the most haunted inns in the state, The Myrtles Plantation. Come Explore its spooky menu and other offerings with Haunted Journeys

Originally named "Laurel Grove", it was built by General David Bradford in 1796. The Myrtle Plantation stands as one of the oldest and a classical example of a Southern working mansion. The original house featured six bays and three dormers on the roof. In the mid-1850s, the one-and-a-half-story house was extended south, almost doubling its size. It was during this time that the name was changed to "The Myrtles" after the crepe myrtles that grew in the vicinity.

Bradford lived there alone for several years until President John Adams pardoned him for his role in the Pennsylvania Whiskey Rebellion in 1799. He then moved his wife Elizabeth and their five children to the plantation from Pennsylvania. Upon Bradford's death in 1808, his widow Elizabeth continued running the plantation until 1817, when she handed the management to Clarke Woodruff, one of Bradford's former law students, who had married her daughter, Sara Mathilda. The Woodruffs had three children: Cornelia Gale, James, and Mary Octavia, before Sara Mathilda and two of her three children died in 1823 and 1824 of yellow fever.

The property went through many historical event challenges, exchanging ownership to many hands that underwent a fair share of young tragical loss of life due to illness and turmoil pertinent to its time. Pushing forward to the 20th century, the land surrounding the house was divided among the heirs of Harrison Milton Williams.

In the 1950s, the house itself was sold to Marjorie Munson, who apparently noticed odd things happening around the Myrtles resulting in numerous ghost stories. The plantation went through several more ownership changes in the 1970s before being bought by James and Frances Kermeen Myers who ran the plantation house as a bed and breakfast. During this time Frances Myers, writing as Frances Kermeen, wrote a book about the Myrtles Plantation, naming it as the most haunted house in America. The current owners, John and Teeta Moss, continue to open the house for tours and overnight guests.

Tragically, in August 2014, a fire occurred in the historical General's Store, located just 10 feet from the main house, causing substantial damage. The most severe damage was in an extension of the building constructed in 2008 leaving most of the original structure intact and not harming the house at all.

The entry doors are surrounded with a transom and sidelights, showcasing original hand-painted stained glass, etched and patterned after the French cross to allegedly ward off evil. The Myrtles has 22 rooms spread over two floors. The spacious entry hall runs the length of the house and features faux-bois, open pierced friezework molding, a French Baccarat crystal chandelier weighing more than 300 pounds, and a cantilevered staircase. The flooring and most of the windows in the house are original.

Listed on the National Register of Historic Places, the Myrtles Plantation continues to be a popular tourist attraction due to its association with paranormal activity and has been featured in many books, magazines, newspapers, and television shows.

The Myrtles Plantation is touted as "one of America's most haunted homes." There are a variety of legends and mysteries surrounding the Myrtles. They merit to be revealed for they have been known to be the chilling influencers of its hauntings of (at least) 12 phantoms.

Many feel that the spectral energy is intensive because it is reputedly built over a Tunica Indian burial ground. A ghost of a young Native American woman has been reported being seen in the property, including the spirit of a Native American woman in a gazebo on the property. Presumably, she is thought to be one of the people buried here long ago.

Ten murders have been reported to have occurred in the house, although historical records only indicate the murder of William Winter. He was an attorney who lived in the plantation from 1865 until 1871. He was shot by a stranger. After being shot, he staggered inside the house and died trying to climb the stairs. He died on the 17th step of the stairs. To the present day, visitors, as well as employees in the hotel, still hear his dying footsteps.

The most famous legend is that of Chloe. It all started with one of the plantation's owners, Clarke Woodruff was known as an honest man but with an insatiable sexual appetite. One particular girl that took his attention was one of his slave girls on the plantation named Chloe. The young girl knew that refusing Woodruff’s advances was punishable by working long hours under the blistering sun, or worse. Regretfully, she began a sexual relationship with Woodruff that lasted for a few years.

Worrying that Woodruff’s wife would find out and punish her, Chloe began eavesdropping on the family’s conversations. One day, Woodruff caught her listening and ordered her ear cut off as a punishment. From then on, Chloe was forced to wear a turban to cover her disfigured ear.

Chloe wanted revenge. One night, when the family was about to sit down to dinner and Woodruff was away, Chloe allegedly slipped a bit of poison into their food. Within days, Woodruff’s wife and two of his children were dead. The other slaves, afraid that Woodruff would find out what Chloe had done when he returned, took the matter into their own hands. They grabbed Chloe and hung her from a nearby tree. When she finally died, they cut her body down and threw it into the river.

According to legend, Chloe’s spirit lived on. But her hauntings did not take flight until the 1970s when Myrtles Plantation was purchased by the Meyers family, that its reputation as a haunted house would come about. The family opened the plantation as a bed and breakfast and it didn’t take long for strange things to take place. The guests at the Myrtles Plantation reported hearing strange noises. Others actually saw a full ghostly apparition of a young girl wearing a turban.

The proof of Chloe's existence was captured on film by the proprietress in 1992. A photograph was taken (for insurance purposes) which included (what appeared to be) a slave girl standing between two of the buildings on the plantation. This image has been credited to be of Chloe. This photo (and an expanded version) is included in our gallery below.

The National Geographic Explorer filming crew determined that the photograph definitely contained what appeared to be an apparition of what they believe to be a slave girl. The slave girl appeared in the breezeway between The General’s Store and the Butler’s Pantry of the mansion. The horizontal exterior boards of the mansion were clearly visible through the body of the apparition. National Geographic Explorer used the photograph in their documentary.

Some folks have claimed to have seen the phantoms of young girls dressed in era clothing. Again, another photograph is credited to have captured the image of one of the young girls. The photo clearly depicts a young girl dressed in antebellum clothing. (We have also included in our gallery for your review.) She appears to be peering out the large window to the left of the rocking chair, looking directly into the camera. Today, she is known around the world as the "Ghost Girl".

Whether these legends and mysteries are validated with historical records (or not), there is no denying that this magnificent plantation does hold an incredible spectral dynasty of phantoms and their activities. The Myrtles Plantation certainly gives off vibes of eerieness, deep mystical beauty, and an unexplained mystery. To stay at the Myrtles is a delight to any lover of southern old charming plantations. Add the colorful flavors of the supernatural intensity here, you will no doubt have an unforgettable experience never to be forgotten.

In 2002, Unsolved Mysteries filmed a segment about the alleged hauntings at the plantation. According to host Robert Stack, the production crew experienced technical difficulties during the production of the segment. The Myrtles was also featured on a 2005 episode of Ghost Hunters, followed by other shows, Ghost Adventures and Most Terrifying Places in America. 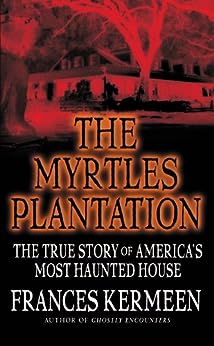