Newport, RI is home to one of the most haunted inns in the state, The Outlook Inn (formerly known as the Pilgrim Inn). Come Explore its mystery with Haunted Journeys.

Formerly known as the Pilgrim Inn, the Outlook Inn was first built in 1775 as a private residence, probably for an upper-class merchant’s family. This property, fortunately, was spared during the Revolutionary War, unlike 800 less fortunate older structures in the city of Newport.

The Revolutionary War was cruel to Newport with much destruction imposed on it. But the folks in Newport were motivated to restore their older public building after they survived British occupation. 19th-century building starting becoming their new commerce of tourism, since the oceanfront properties were fond getaways for people outside the area. On the other hand, Newport's fast growth in the 1700s and early 1800s led to the incidence of deadly epidemics. Many succumbed to cholera and Typhoid.

The Outlook Inn building is an iconic symbol of Newport's history. As the economy in Newport began to flourish, the inn was a favorite destination. In the 1800s is believed was the home of an Irish family, that lived on the third floor running the inn beneath them.

After the Civil War, the Navy established a full base in Newport. Needing a place for the sailors to live, the Pilgrim Inn building was transformed into an apartment for Navy families. The simple dwelling was renovated into 11 separate rooms.

At some point, the inn became a homeless shelter for men. The Historic Hill section eventually enjoyed an urban renewal moment, encouraging the restoration of the building to its former glory. Soon, thereafter, it opened as a bed and breakfast inn. In 2000, investors bought this charming building, and turned into a cozy bed and breakfast inn. They fixed it up to please their clientele, a historical Victorian in style. Just recently it has gone through another renovation.  Known previously for many years as the Pilgrim Inn, new ownership has instilled a new name, The Outlook Inn.

With such intense history and being in one of the most historically targeted cities in both the Revolutionary War and the Civil War, there is no doubt that there is plenty of paranormal activity that speaks about it.

Many say that when children die suddenly from illness or accidents, their souls may choose to stay in their earthbound home. This could be a reason why the spirit of a young ghost girl may be seen staring down from one of the inn's windows onto the street. Many have caught this young phantom looking up to the eighteenth-century hotel from the street. Her period attire reflects that worn during the 1800s and early `1900s. She is suspected of having been a victim of one of the infectious diseases that hit Newport in the 1800s.

A medium once connected with another young girl around the age of 4-6 called Jessica. She is thought to be one of the children of the Irish family that once owned the property. She wears an old fashioned grey dress and her spirit has been seen by many as well. Being a light-hearted and playful ghost, she likes to tinkle with electrical items. Sometimes the intercom will buzz for unknown reasons. She will also play with the clothes dryer while the staff is doing their chores. If you want to try to see Jessica, you may wish to go to the third floor's room 11 and 8. In these rooms, guests have seen small shadows and movements, connected to the auditory sound of a disembodied child’s laughter. Guests staying in a room next to one of Jessica’s rooms, heard a little music box being played in the middle of the night. The next morning, the couple found out that this room was empty, with no living person spent the night there. 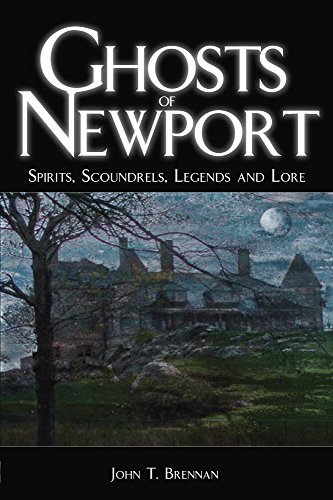