San Francisco, CA is home to one of the most haunted places in the state, Alcatraz Federal Prison. Come explore its mystery with Haunted Journeys.

Located in the San Francisco Bay, Alcatraz Island and Alcatraz Federal Penitentiary has a long and varied history.

In 1775, a Spanish explorer, Juan Manuel de Ayala, mapped and named the island "Isla de los Alcatraces" (Island of the Pelicans). Later in 1850, President Millard Filmore ordered the island reserved for military use, building a fortress equipped with cannons. Its purpose was to protect San Francisco. The U.S. Army began housing military prisoners at Alcatraz by the late 1850s. It was also during this time, Alcatraz became home to the West Coast’s first operational lighthouse. This use was not practically needed, and in 1868 it became a military prison.

In 1909 most of the original fortress was demolished and a new prison was built, nicknamed "The Rock". The work was done by the prisoners themselves, which was chilling just on its own. The labor provided by its inmates constructed a new cell house, a hospital, mess hall, and other prison buildings. In 1933, because escape from it was considered impossible, Alcatraz was taken over by the US government and turned into a federal penitentiary for civilian convicts thought especially dangerous.

The prison had 150 or so staff initially and they and their families lived on the island. At any one time there were usually about 250 prisoners, living one to each tiny cell, typically 9ft long by 5ft wide and 7ft high. During its years of operations from 1934 and 1963, some of the most famously dangerous prisoners were placed here. These included Al “Scarface” Capone, murderer Robert “Birdman of Alcatraz” Stroud, George “Machine Gun” Kelly, and Alvin "Creepy" Karpis.

The prison was shut down on March 21, 1963, by US Attorney General, Robert F. Kennedy, due to high operating costs. Transporting food, water, and other supplies to the island made it far more expensive than other federal penitentiaries. The island was then occupied by a group of Native-American activists in 1969, lasting for almost two years, driven out by federal marshals in 1971.

Shortly after, it was included in the new Golden Gate Recreation Area in 1972, and since then, opened to the public. Today, historic Alcatraz Island is a popular tourist destination, especially those that are looking for the thrill of the haunted.

Although the officials of Alcatraz have publicly dismissed the reports of ghosts at Alcatraz, the spectral powers of the island, though have been identified years prior. Native Americans spoke of the evil spirits they purportedly encountered on this property. Prisoners, rangers, and visitors mutually have reported a wide range of alleged ghostly activity on Alcatraz.

Some of the paranormal activity includes whispering within the cell and locked doors shutting close on their own. Many have seen phantom figures in the corridors, with cold spots unexplained by the elements of the space. Some have even heard the sounds of strange music and sewing machines.  The officials of Alcatraz have publicly dismissed the reports of ghosts at Alcatraz as nonsense and deny their existence, but that does not explain all the stories that come from former inmates, guards, and visitors. Gut-wrenching disembodied moans can be heard at times, along with unexplained footsteps, screams, a woman crying, floating lights, clanking chains, and apparitions have been reported as happening on The Rock.

It is said that Al Capone makes his presence known with his disembodied whispers, apparitions, and even the sound of him playing the banjo. Banjo music is heard coming from his former cell and in the shower room, two areas he favored playing his music while residing here.

This property was featured on a variety of paranormal television shows, including on episodes of Ghost Adventures, Ghost Lab, Dead Files, Scariest Places on Earth, and Ghost Hunters. 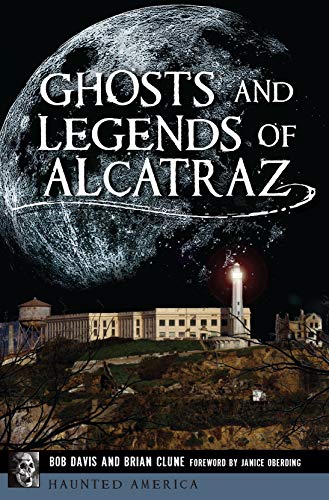