San Antonio, TX is home to one of the most haunted places in the state, The Alamo. Come explore its mystery with Haunted Journeys.

The Alamo was one of the most epic battles fought in the history of Texas and the United States in 1836. The siege lasted 13 days before Mexican troops under General Santa Anna defeated the Texas army garrisoned at the Alamo.  On March 6, the Mexican army attacked again, overrunning the mission and killing all defenders of the Alamo, including William Travis, Jim Bowie, and Davy Crockett.  Between 182 and 257, Texans died, and around 600 Mexicans were killed or wounded.  Several women, children, and slaves were released and told of the defeat. The Texans defeated the Mexican Army at the Battle of San Jacinto on April 21, 1836, ending the rebellion.

Most of the ground that makes up Alamo Plaza today was used as a cemetery between the years of 1724 and 1793. It is estimated that about a thousand people were buried here. After the battle, most of those who died were also buried in the area.

Stories of apparitions go back to just weeks after the battle. Years later, the City of San Antonio utilized the old mission as a police headquarters, the old barracks, and a jail.  Prisoners complained of incredible supernatural activity. They depicted ghostly guards that would be seen marching up along the roof. They also reported dark figures lurking the corridors and night. Chillingly, they would also hear the disembodied sounds of moaning, loud enough to awaken the staff and the prisoners. The hauntings were so intense that the guards often refused to patrol when on the night shift.

Today, the spectral activity is no less forgiving. Visitors may see phantoms of soldiers coming through its roof and walls.  A ghostly guard has been reported standing on top of one of the Alamo buildings, especially on dark and stormy nights. A ghost, widely believed to be a Mexican soldier is often seen pacing the grounds with hands clasped behind his back and head held low.

This property has been featured on an episode of Haunted History. 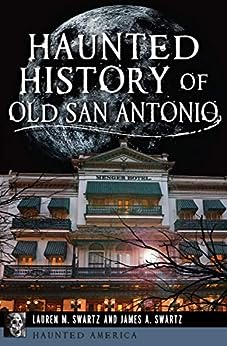